TEKASHI 69 post sentencing dinner ends up in a SHOOTING in MID-TOWN Manhattan..smh

Here we go again ya’ll. According to reports from pix11 TV rapper and self proclaimed King of N.Y. Tekashi 69 was to attend a dinner date at the infamous Philippe Chow restaurant located on the lower east side of N.Y.. He was scheduled to meet an executive at the restaurant  but was turned around by a  security guard that was secretly hired by the executive because 69 brought an entourage along with him. 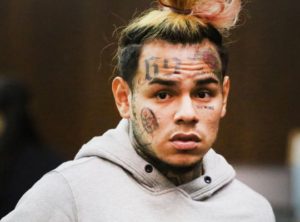 Here’s the thing: 69 actually left the premises, according to the reports, but parts of his entourage actually came back to the restaurant, upset because they were denied entry initially. That return of the entourage lead up to the security guard allegedly getting hit over the head with a chair, but little did the entourage members know that the security guard was actually a retired Police Officer and a licensed gun carrier that lead to one of the members getting shot in the torso. All of this madness happens just hours after 69 pleading out in court to 4 years of probation for the child sex performance case he was fighting from some time ago. For more in depth on this story go to pix11 TV