Footage of Sway Lee getting his face busted on stage

Mega rap star, entertainer and song writer Sway Lee, who is one half of mega rap group RAE SREMMURD  was assaulted by a fan who threw their phone on stage during a Sway Lee performance thus causing his mouth to bleed heavily while he was performing on stage. Looking at the video, Sway Lee seemed pretty riled up about it too. YA THINK!  After the show, Sway Lee took to his “live feed” exclaiming that he will have to go to the hospital to get treated for his injuries. He also says,  “I never thought I was gonna have to sue a fan… but I am” We don’t know how serious he is about the lawsuit but you must ask yourself: If he threw a phone at a fan or hurt a fan in any form, would the “fan” sue him? 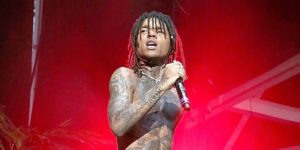