Back in 2015, during the Lil Wayne and Baby feud Lil Wayne’s tour bus was shot up after a concert. Although there was speculation as to why the bus was shot up there was no hard evidence on a motive. The alleged shooter named JIMMY “PEEWEE ROSCO” WINFREY who is currently serving a 10 year prison term along with a 10 year post release probation once he’s released says that he didn’t do the shooting but is not saying who the shooter was. Prosecutors from COB COUNTY DISTRICT are going to deliberate within the next few weeks on weather or not to charge BABY and rapper YOUNG THUG on the attempt AND CO-CONSPIRING on the shooting of Lil Wayne’s tour bus. 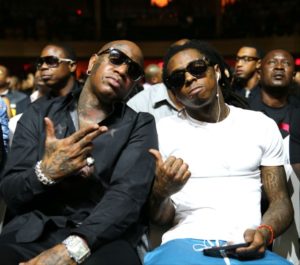 The reason for this entire thing being brought back up is because Aldin Lewis, the driver and owner of Lil Wayne’s tour bus filed a pain and suffering civil suit that opened up more incriminating evidence. According to reports there is potential evidence in the civil suit that could have criminal charges brought up on Baby and Young Thug on the co-conspiracy charges. There is also evidence showing that 12 phone calls made from Young Thugs phone to alleged shooter PEEWEE ROSCOS phone leading up until the time of the actual shooting. Also a phone call to PeeWEE from Birdman while he was incarcerated telling Roscoe that it’s time for him to come out and collect his money. SMH

However, peep the video